When my wife lost her faithful companion of 14 years, she couldn’t stand not having a dog, so a few days later we went puppy shopping for a new best friend to fill the hole he had left in her heart.

After a few stops and several playful boy pups that made us  laugh but that we felt no deep attraction to, the attendant put a timid little girl pup in the meeting area. She was cute, but just sat there, shivering, startled by every sound. 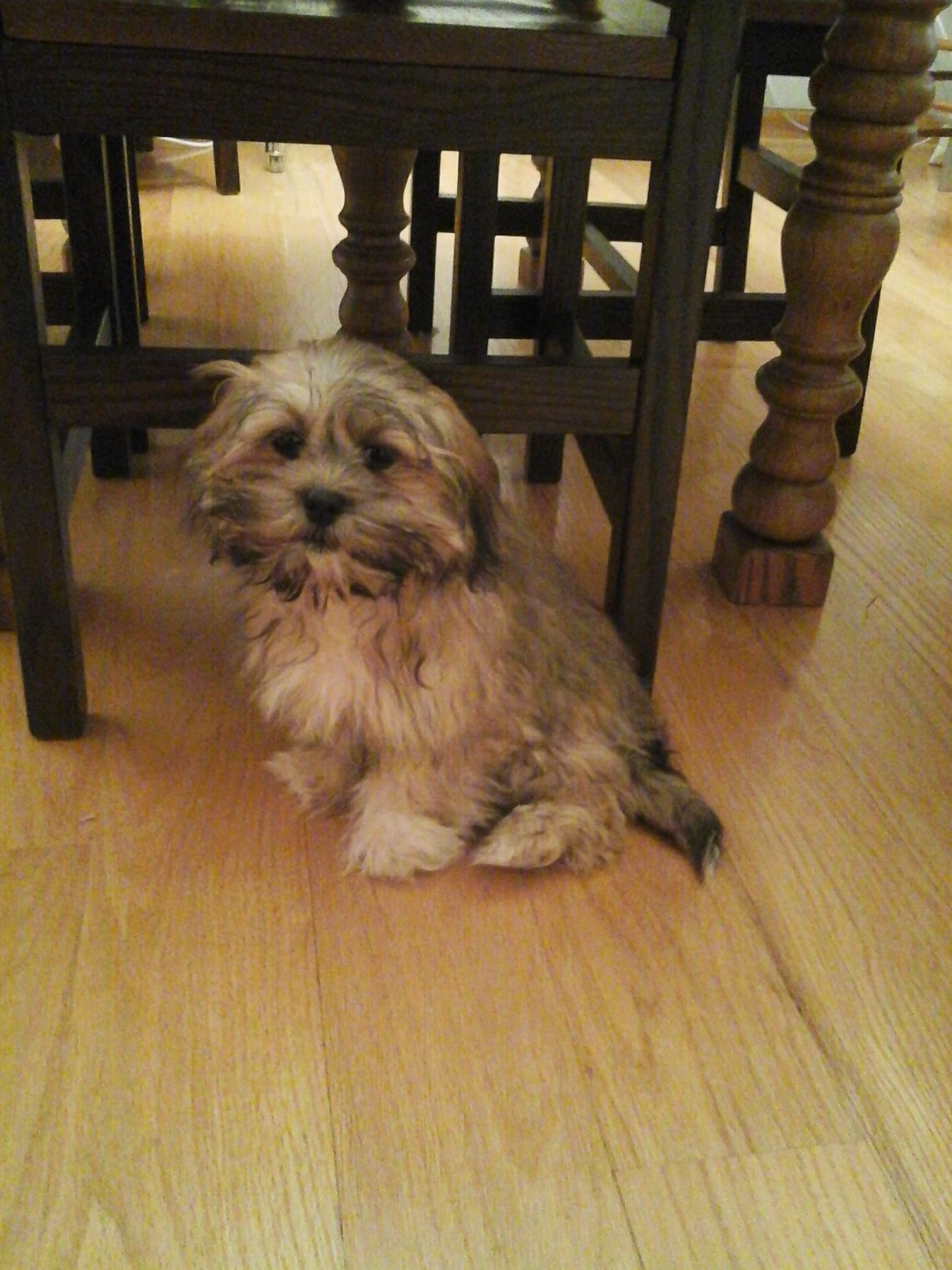 I wasn’t impressed. But my wife, quintessential nurturer that she is, knelt before her quietly, her hand stretched out for the pup to sniff, then gently picked her up and held her in her arms. The shaking slowed. The puppy burrowed her head into my wife’s shoulder and soon the shaking stopped completely. 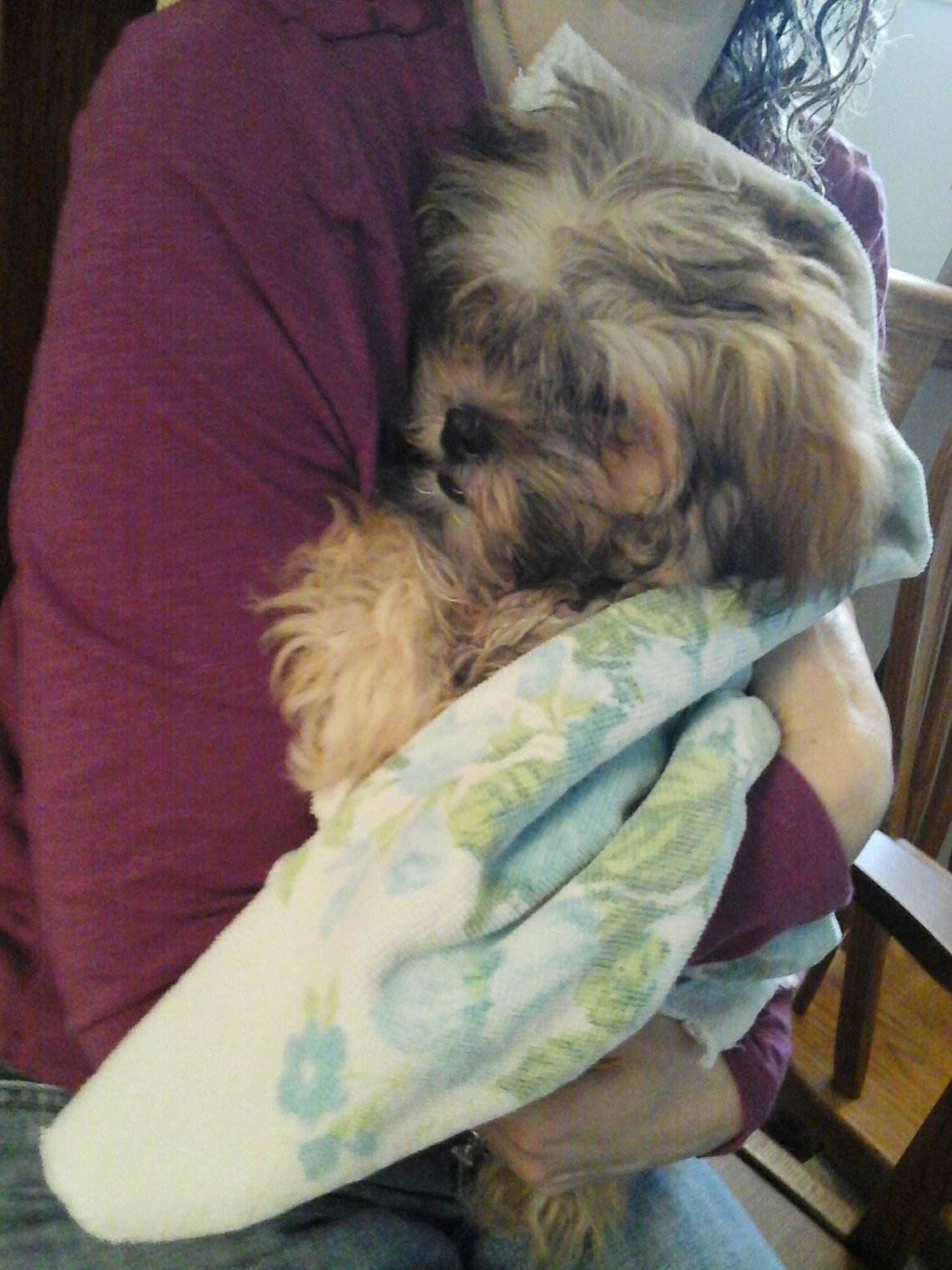 After a few minutes of my wife cuddling her and stroking her, she started to perk up and act like a normal puppy. She became alert… but not fearful. She became curious about sounds instead of skittish. My wife put her down on the floor and they played with a pink pacifier squeaky toy. The puppy started to explore the area… like puppies should. She was a different dog than the initial shivering ball of golden fur.  It was as if she had taken strength and courage from my wife, as if my wife had poured life into her.
And that was it. The bond had been forged. In just those few minutes they had fallen totally in love with each other and become inseparably linked.

We took her home and my wife named her Zoe, which is a Greek word meaning, at least in a Scriptural context, “the God-kind of life”. And wow! Has she ever lived up to her name!

We’ve had her a little over a year now, and she’s no longer a fragile, timid little thing. Now she’s playful, friendly, and strong. At only a few months old she tackled her twice-as-big Lhasa Apso brother like an all-pro linebacker. He was just sitting their minding his own business when….KA-PLOW! She galloped across the room and rammed herself chest-first into his side. He tumbled head-over-heels twice before coming to rest with a befuddled look on his face. It took me 10 minutes to get my laughter under control! I still have a hard time finishing the story with intelligible sentences!

Our last three dogs have all been Lhasa Apsos that we just adored, but this time around we decided to also consider some mixes. That’s what Zoe is — a Lhasa-Bishon mix (Lhasa mixed with Bishon Frise). And I gotta tell ya’… Best Dog Ever!

The spunk, cuteness, intelligence and protectiveness of a Lhasa accompanied with the friendliness, softness, and playfulness of a Bishon. It’s been an unbeatable mix for us.

The friendliness-protectiveness dialectic has been especially hilarious to watch. Whenever she sees someone new, the friendliness side of her personality just itahas to go greet them. But as soon as they get close and try to give her some attention, the protectiveness kicks in and she backs away, tossing her head and barking at them with a playful snarl that is an oxymoronic mix of a warning growl and a playful bark.

So they give her a friendly smile and, with an understanding nod, turn to walk away.

But she can’t have that! She wants a new friend!

She chases after them prancing and whimpering an apology with a friendly eagerness that says “I’m sorry! Please come back and visit!”

And of course, no one can resist such a cute plea.

But as soon as they reach their hand out to her again, she can’t keep her protective instincts from reacting. yip-snarl. ruff-toss. Again!

And I laugh. I cant help it! It’s so cute to see the two opposite sides of her personality struggling with each other I can’t keep it inside!

Oops. Her head is tilted down and her Kong-sized brown eyes are glaring at me.

She’s obviously not happy with my insensitive explosion of mirth. Her look is filled with disdain, as if to say, “What are you laughing at, Bucko. You do the same thing sometimes, you know!”

It takes a moment for the canine wisdom to sink in, but then I realize… she’s right!

Now don’t sit there looking so smug. I’m not the only one.

Without realizing it, many of us are struggling with these same conflicting feelings… especially when it comes to God.

We want to believe, so we take a step towards Him.

But then real life happens, and it shatters our fairy-tale expectations:

Something good that we wanted to happen doesn’t…

Or past disappointments make us skeptical and we figure God is just a modern day myth rather than a spiritual reality.

When these difficulties arise, we too often turn away, barking at Him with a how-could-You-hurt-me-like-this snarl. (Mark 4:13‭-‬20)

If Zoe’s potential friends have the time to wait, if they’ll be gentle and quiet, if they’ll be patient and understanding, if they’ll give her the chance to come to them instead of forcing themselves on her, sooner or later she’ll get comfortable with them. She’ll move closer to them, and let them pet her, and soon they’ll become the best of friends.

God is like that with us. He doesn’t just try once or twice and then leave us. When we turn away, He waits patiently for us to come back. He’ll do it as many times as it takes.

So quietly, in fact, that sometimes we wonder if He’s even there.

But He will never force Himself on us.

Some mistake this as meaning that He doesn’t care or doesn’t exist. They don’t realize that it’s actually an example of the highest form of love — self-less, understanding, patient, and tolerant. With this love He gently encourages us to come back to Him and cultivate a relationship with Him.

And when we do…

When we let Him touch our hearts…

When we draw strength and comfort from being in His presence…

When we decide to draw close to Him and develop an intimate, interactive, and symbiotic friendship…

When we become inseparably linked with Him…

It is then that our fears and our confusions will subside and He can help us experience “zoe”, the God-kind of life.

The title is a play on the word “dialectic”, the tension between two opposite but interacting forces… like Zoe’s friendliness and protectiveness.

Isn’t it amazing how much dogs can teach us?

I also invite you to check out what I think of as my best work on “My BYOB List (My Personal Favorites)“.

Here’s my top five favorites to get you started: